The Astrological Aeons (or Ages)

What are the Aeons and Why they are Important?


I cannot begin to express the importance of astrology in the use of magic. It underscores everything from the timing of magical operations, to beneficial auspices to the energy of the times we live in. Even if you are not an astrologer it is important to get a grasp on the attributes of the 12 signs both their benefits and their negative aspects as well as the energy of the aeons. I would consider the energy of the aeon to be the macro influence and say the daily hours in a certain sign to be the micro influence. Once you learn and get into a rhythm you will be in "flow" and you will be amazed at how much more smoothly your magical operations will go as well as certain aspects of your life.

For now I just wanted to touch base on the Aeons or Ages to give you a brief over view because unless you are a student of astrology you may not know what an Age is or why it is important. However,  once you begin to see and understand you will see patterns and patterns are extremely important to magic. Timing as they say is everything.

An Aeon is basically a period of time that lasts for about 2000 years and is within a certain sign of the zodiac. There are 12 signs (Pisces, Aries, Taurus, Gemini, Cancer, Leo, Virgo, Libra, Scorpio, Sagittarius, Capricorn & Aquarius). This "Age" is marked by certain characteristics and grows and peaks at about one thousand years and then declines as the next age emerges. There will be a blending of the ages at the beginning and end of each age until the new age gets into full swing. Let's take the last age that we have just passed through, the Age of Pisces, and I will give you some points as to the movement of this Age. For our purposes I am rounding to an even number so that in our Western calendar the Age of Pisces starts at year 0 and ends in the year 2000AD. Astrologers do not agree as to the actual times of the Ages and will argue. But this time frame is close to many of the dates and is a nice round number, so lets use it.  Another thing to note that is very important, is that the opposite sign on the zodiac will also be present in the Aeon as opposition to the nature of the Age. So in Pisces it was Virgo, the Goddess, and we see that all things female and sacred were crushed during Pisces.  It was also the rebellion of Virgo that hid all of the "forbidden" knowledge that Pisces sought to crush which was later discovered and ushered in the Renaissance as Pisces began to decline. The opposition sign will be ever present as a rebellion to the Age that is currently shining. This is balance.

If we look at the Age of Pisces we can see that it started with the birth of Christ. The beginning of the Christian church. This beginning of this Age is marked with Christian mysticism and the growth of the Church and peaks around 1000 AD (we look at Pope Urban the II who became Pope in 1088) and who crushed the practice of medieval priests marrying as well as started the first Crusade. This was the peak and strength of Christendom. Sexuality was repressed, Islam was challenged and all other knowledge and philosophy was considered heresy. The sign of Christianity is the fish and it is no coincidence that it is also the sign of Pisces. The links are there, water sign, holy water, lack of sexuality, piety, mysticism, dreams and sacrifice. As magicians and witches we MUST have historical knowledge and understanding of signs and symbols.

The Characteristics of the Aeons


I have created an infographic (ahhh the modern age) of a wheel of the Ages. For our purposes I start with Aquarius our current and New Age (ever wonder where the term 'New Age' comes from....?) and then I go backwards through the Ages to the last age of Capricorn which began 20,000 years ago. I use historical and anthropological evidence to show the major energies and events of each age. The further I go back the harder it is as we enter into pre-history. As of this writing modern humans seem to be about 100,000 years old so this would put the turning of the wheel at almost 4 rotations. Each rotation will be marked by the consciousness of humanity at that time. So the last Age of Pisces will not be like the next to visit us in another 12,000 years or so but will have some similarities. 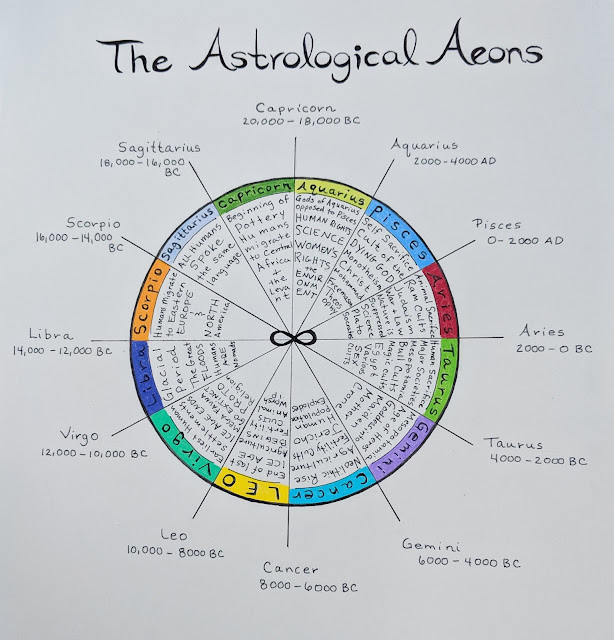 Here are the very basic characteristics of the Aeons as they have past for the last 20,000 years. As we are just starting in Aquarius I cannot say how it will evolve but I have placed some of the changes that are quite different from Pisces so far.

Aquarius (2000-4000 AD): Gods of Aquarius are opposed to Pisces, Human rights, Science, Women's rights, the Environment, the Individual, the Mind.

I hope that you have found this interesting and useful and I encourage you to do your own digging and hunting into our collective energies as a species.